Tripoli is a very rich city containing many mosques (around 90) that are spread all over the city. In every district of the city there is a mosque. During the Mamluk era, a lot of mosques were built and many still remain until today.

Some of the more known mosques: 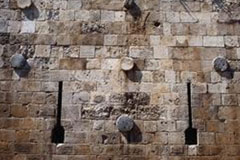 The Mansouri Great Mosque or the is a mosque in Tripoli, Lebanon, also known simply as The Great Mosque of Tripoli. It was built in the Mamluk period, from 1294 to 1314, around the remains of a Crusader Church of St. Mary.

The Mansouri Mosque was named after the Mamluk sultan who conquered Tripoli from the Crusaders in 1289, al-Mansur Qalawun.

The mosque itself was erected by his two sons, al-Ashraf Khalil, who ordered its construction in 1294, and al-Nasir Muhammad, who had the arcade built around the courtyard in 1314. 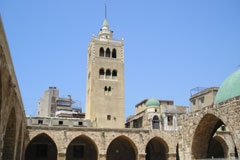 The Mansouri Mosque occupies an area of about 50 by 60 meters in the middle of the city. It does not have an elaborate facade, but is readily identifiable from the outside by its minaret and its main northern gate. The floor plan of the mosque shows a traditional arrangement with a central courtyard, single porticoes on three sides, a deeper qibla side for prayer, and a central fountain. The mosque has three axial entrances set to the north, east, and west, but there are also two others on either side of the prayer hall in accordance with traditional fashion. K.A.C. Creswell regards the three axial entrances as a Syrian feature which began in the Umayyad Mosque in Damascus, and later became part of other Syrian mosques, like the mosque in Harran, and was then copied in other parts of the Muslim world, particularly in Anatolia and a number of mosques in Cairo. 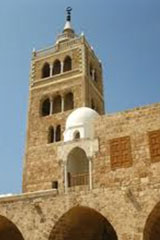 To the right of the Mansouri Mosque's main entrance are two granite columns springing from the pavement, remnants of classical times that were for some reason left standing. They do not seem to have any practical or decorative function. The courtyard which dominates the building is enclosed by porticoes to the north, east, and west, and by the closed prayer area to the south. The porticoes display a rhythmic arrangement of identical low arches in the courtyard, and a continuous corridor-like area of simple cross-vaulting behind. These are the riwaqs built by al-Nasir Muhammad, when he completed the mosque in 1314. The ablution fountain located in the center of the courtyard consists of two adjoining square units, one of which is covered by a dome. When Abd al-Ghani al-Nabulsi visited Tripoli in 1700, he described the fountain as "having a huge dome and pillars so large as to need four men to embrace them." 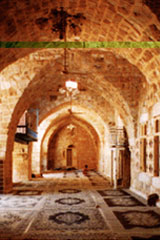 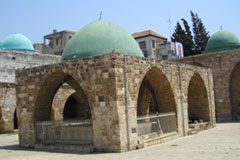 The prayer hall of the mosque covers the entire qibla side of the building and consists of two aisles divided by six large piers to form fourteen areas, thirteen of them covered by simple cross-vaults, and the fourteenth—the area in front of the mihrab—by a small dome. The qibla wall has three mihrabs—an axial main mihrab with a rosette positioned above it and one on either side—and a minbar ("pulpit"). The minbar is a wooden chair completely covered with geometric carvings. The painted rosette above the minbar is reused; the word "Allah" appears in its center and the same two motifs as were used inside and outside the main gate decorate the periphery. Four-pointed rosettes in relief run around the circumference of the roundel and a zigzag motif forms circles within. This decorative rosette, of the same style as the gate, was a part of the Crusader church. 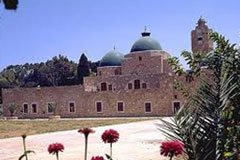 Emir Saif al-Din Tinal, twice governor of Tripoli (1326 to 1333 and 1335 to 1340) built a many-domed mosque on the emplacement of Tripoli’s Carmelite church .This church had been built by the Crusaders outside their walled city and, after the fall of Tripoli in 1289, stood deserted and in ruins. The main building, beneath a series of domes, has a number of granite columns with late Roman or Byzantine capitals standing in two rows. In the center of the mosque under the largest dome, the position of four large columns reveals the center of the Carrnelite church. An elaborate portal of alternating black and white stone at the rear of the mosque leads into another room. Its overhanging half dome ceiling with stalactites, the marble plaques and inlay work competes in beauty with the main portal of the alQartawiya madrasah .The mosque was built in the year 1336 (A.H.736). 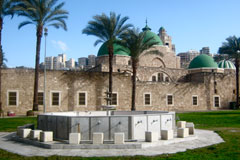 The minaret is square with walled-up Crusader type side windows, decorated with coussinets. It contains a double staircase. This probably was the belfry of the Crusader church to which the governor’s fourteenth century architects added a typical Mamluk enclosed balcony on top.

The mausoleum has nothing to do with the original Carmelite church plan. It has a number of domes, one being deeply ribbed. It is here that Saif al-DinTaylan wished to be buried besides the mosque which he built and endowed for the inhabitants of Tripoli.

The foundation act (waqfiya) gives a list of the properties of the Emir which he donated for the upkeep of the mosque. This includes a garden, called al-Hamawi, on the bank of the Abou Ali River to the east of Tripoli, two shops at the entrance of the mosque which do not exist today, a garden called Altuntash, two shops near the market for the sale of armaments, facing the bath of Esendemir (hammam al-Hajeb), one third of a caravanserai and the village of ArzOntya, near Arqa.

The income from this property was to go to the endowment fund of the mosque. What remained, after expenses were paid, was to be given to the poor of Tripoli and those in need passing through the city. But in no case, according to the wishes of the donor, were regular sums to be given to the poor. The superintendent of the mosque had to examine each case on its own merits, no doubt to discourage begging. 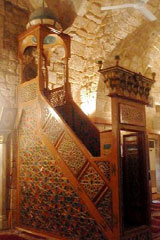 For the upkeep of his mausoleum, Saif al-Din Taynal made a separate foundation act (waajiya) He appeared to be a man of considerable means for he donated all the market-place next to the mosque Al-Arzuni where the old clothes vendors of Tripoli were established. This included sixteen shops and sixteen warehouses, two shops in the blacksmiths’ souk, all the shops and warehouses which he himself had built on the emplacement called the "old court", six shops recently built by him in the Suwaiqat al-qadi, between the two bridges which span the Abou Ali River, a land around the mosque and a land which belonged to him near the hippodrome. What remained, after all expenses were paid, was to be distributed to the poor, provided each case was examined in order to avoid mis-use of the endowment fund.

A late Mamluk period building of Tripoli is the Arghoun Shah mosque built in the last quarter of the fifteenth century, less than fifty years before Tripoli fell to the Ottomans. Its south side has been rebuilt and painted but the east façade which stands along a picturesque little Street has been left untouched, as well as its minaret. In addition to six bands of stalactite friezes which decorate the round body of the tower, the minaret’s ten sided balcony has ten stone screens of richly carved Arabesque and geometric patterns, each one entirely different from the other. They are by far the most elaborate stone screens found in Tripoli and perhaps in all of Lebanon..

Over the main entrance of the mosque is a decree dated October16, 1475 (A.H.880) issued by the military cabinet of S 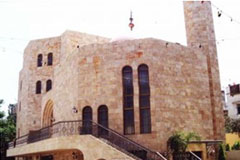 ultan Qaidbey at the time Azdemir al-Ashrafiwho  was governor of Tripoli. It specifically forbids that the agricultural land bequeathed by Arghoun Shah for the endowment of the mosque be leased to the wealthy to cultivate. On the contrary the field in question should be leased to the poor so that peasants of limited means could work on the land and profit thereof."