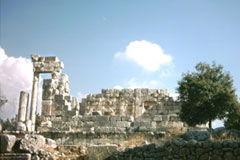 In Antiquity, the two Roman temples that are now called QasrNaous must have been quite a sight. They are situated on a hilltop, some 600 meters above the sea, and must have been visible from a great distance. Today, the view is breathtaking.

The first temple, the one in the east, has survived pretty well. Like the sanctuary at Machnaqa, it is surrounded by an enclosure (a temenos) with a decorated entrance gate (propylaea). In front of the temple, the remains of an altar are visible, while a substantial part of the temple itself is still standing: the whole platform, two columns with Corinthian capitals, and part of the walls. You can recognize the 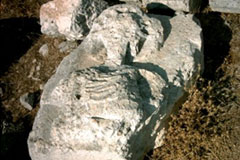 remains of a staircase like the one in the large temple in Niha and the temple of Bacchus in Baalbek, which proves that there was a second floor inside the cult room. Another similarity is the presence of an (inaccessible) crypt.
The Sun God near the second temple of AïnAkrine From the description by the nineteenth-century scholar Ernest Renan, who visited the place in 1860-1861, we know that the lintel of the door of the first temple, which is now missing, was decorated with a winged sun disk: a motif that can also be found elsewhere and originated in Egypt and can also be found in the temple at Sh'him. 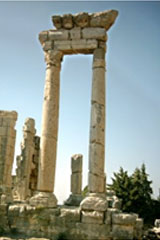 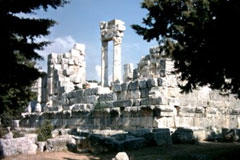 The second temple of AïnAkrine, a bit to the west of the first sanctuary, is also surrounded by an enclosure with a gate; you can see that an earthquake must have taken place, because the big stones of the gate (which is perfectly preserved) are no longer on their bases.

This sanctuary is less well-preserved, and it would seem that it was destroyed in Antiquity; people have taken the stones from the ruin and have regrouped them to restore the monument, but something has prevented the rebuilding. A relief with the face of the Sun God is now laying in the grass in front of the ruin.