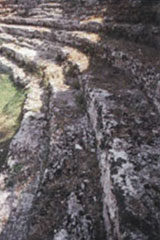 It is situated at the east of the mid –town in Marah el Sheikh .It is sculpted in rock ;its remains consist only of nine tiers .Being half circular .It can accommodate spectators with their backs to the east .This stage extends under houses and expands to the west where bathrooms are buried underground. This stage evinces the financial and cultural importance of Batroun during the Roman epoch, when its inhabitants were given the right to coin money in its name from 31 B.C.till 250 A.D.