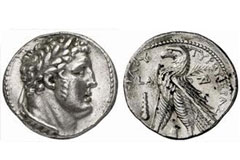 Located on the southern coast of Lebanon, 83 km south of Beirut, the antique town of Tyre was the great Phoenician city that reigned over the seas and founded prosperous colonies such as Cadiz and Carthage and according to legend, was the place of the discovery of purple pigment.

From the 5th century B.C., when Herodotus of Halicarnassus visited Tyre, it was built for the most part on an island reportedly impregnable, considered one of the oldest metropolises of the world, and according to tradition founded in 2750 B.C. Tyre succumbed to the attack of Alexander of Macedonia who had blocked the straits by a dike. First a Greek city, and then a Roman city were constructed on this site, which is now a promontory.

Tyre was directly associated with several stages in the history of humanity, including the production of purple pigment reserved for royalty and nobility, the construction in Jerusalem of the Temple of Solomon, thanks to the material and architect sent by the King Hiram of Tyre; and the exploration of the seas by hardy navigators who founded prosperous trading centres as far away as the western Mediterranean, that ultimately assured a quasi-monopoly of the important maritime commerce for the Phoenician city. The historic role of Tyre declined at the end of the period of the Crusades.

In the modern town of Soûr, the property consists of two distinct sites: the one of the town, on the headland, and the one of the Necropolis of El Bass, on the continent. The site of the town comprises important archaeological vestiges, a great part of which is submerged. The most noteworthy structures are the vestiges of the Roman baths, the two palaestrae, the arena, the Roman colonnaded road, the residential quarter, as well as the remains of the cathedral built in 1127 by the Venetians and some of the walls of the ancient Crusader castle. The sector of Tyre El Bass, constituting the principal entrance of the town in antique times, comprises the remains of the necropolis, on either side of a wide monumental causeway dominated by a Roman triumphal arch dating from the 2nd century AD. Among the other vestiges are an aqueduct and the hippodrome of the 2nd century, one of the largest of the Roman world. 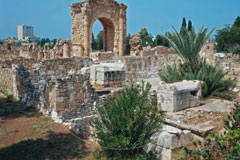 Tyre ruled the seas and founded prosperous colonies such as Cadiz and Carthage, but its historical role declined at the end of the Crusades. There are important archaeological remains, mainly from Roman times.
From the 5th century BC, when Herodotus of Halicarnassus visited it, Tyre was considered one of the oldest metropolises in the world. To demonstrate the renown of this city, it is sufficient to recall the events that associated it directly with the important stages in human history: the discovery of the alphabet (the Greeks who copied and adapted it honouredCadmos); that of purple pigment (which legend attributes to Melkart, the Phoenician Heracles); as well as the construction in Jerusalem of the Temple of Solomon, thanks to the competition held by the King of Tyre, Hiram; and the exploration of the seas by the hardy navigators who sailed as far as the Western Mediterranean and founded trading centres, such as Utica, Cadiz and especially Carthage, which ultimately assured a quasi-monopoly of the important maritime commerce.

Sited at the entrance to the sea, according to the prophet Ezekiel, Tyre, which was constructed on an impregnable island, succumbed in 332 to the attack of Alexander of Macedonia who had blockaded the straits by a dyke before his final assault. The original Greek city was followed in 64 BC by a Roman city constructed on this historically charged site. Tyre was to win back on several occasions some of its former splendour. In the early period of Christianity, it was the seat of a province that incorporated 14 bishoprics. Having fallen under Arabic domination in 636, it was retaken by the Crusaders in 1124 with the help of a Venetian fleet. From 1124 to 1294, the date of its evacuation, the city became a stronghold of the Christians who built 18 churches, not including the chapel of the castle, and reconstructed the cathedral reusing elements of the original basilica. Following the Crusades, the historic role of the city declined. Almost totally destroyed by the Mamelukes at the end of the 13th century, it was only modestly reconstructed in the 18th century. Despite a recent increase of population, Tyre has today only 60,000 inhabitants.
In the present souk, archaeological remains essentially include the Roman city and the medieval constructions of the Crusades. These are divided into two distinct zones:

On the promontory, the site of the archipelago which, as legend has it, was created by Hiram who grouped several smaller islands into one single island, is the city, which became a colony under Septimius Severus. The imposing ruins of the palaestra, the thermae, and the arena still exist, as do the remains of the cathedral built in 1127 by the Venetians, along with some of the walls of the castle constructed during the Crusades.

On the mainland, the necropolis of El Bass is to be found on either side of a wide monumental way dominated by a triumphal arch of the 2nd century. Other important monumental vestiges of this archaeological area are the aqueduct and, especially, the 2nd-century hippodrome, one of the largest of the Roman world.