According to The Catholic Encyclopedia.

“Sidon is the oldest city of the Phoenicians, and the metropolis of the great colonial empire established by this people (Strabo, XVI, i, 22). It is mentioned in the ethnological table of Genesis (x, 19); the territory of the tribe of Zabulon reached even to the gates of this city (Genesis 49:13), but the Hebrews never were its masters (Joshua 11:8; 13:3, 6; 19:28; Judges 1:31; 3:3; 10:12; 18:7). The supremacy of the Sidonians continued until about 1252 B.C., when the Philistines, after partly destroying Sidon, built on the old foundations the city of Dor, above Jaffa.

The Sidonians fled to Tyre, one of their colonies, which then became the leading city. Sidon, called the mother of the Phoenician cities, for Tyre, Carthage, Hippo were settled by emigrants from there, was noted for its bronze, its commerce, navigation, knowledge of mathematics and astronomy; it is mentioned with great praise by Homer (Iliad, XXIII, 743; Odyssey, XV, 425; XIII, 285). After its downfall it is often mentioned in the Bible, but nearly always in terms of censure and as a subject of reproach (Joel 3:4, 5; Jeremiah 25:22; Ezekiel 32:30). Queen Jezabel, wife of Achab, was the daughter of a king of Sidon (1 Kings 16:31), for the city for a long time had its own rulers, although we find the inhabitants rendering service to David for the building of the temple (1 Chronicles 22:4). 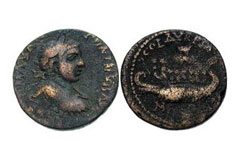 Jesus visited the countries of Tyre and Sidon (Matthew 15:21; Mark 7:31), passing through Sidon after healing the Syro-Phoenician woman. St. Paul, returning to Rome from Caesarea, stopped with his friends at Sidon, where there were some Christian families (Acts 27:3). At an early date Sidon became a bishopric, subject to the Metropolitan of Tyre and included in the Patriarchate of Antioch. Theodore (present at the Council of Nicaea, 325) is the first bishop of whom there is any record; the two most celebrated are Paul ar-Râheb, an Arabic writer of the thirteenth century, and Euthymius, founder of the Basilian Order of St. Saviour, and one of the first organizers of the Melchite Catholic Church, about the latter part of the seventeenth century. For others see Le Quien, "Orienschrist.", II, 811-14. Mention is also made of two native saints: the martyr Zenobius, in the reign of Diocletian (Eusebius, Church History VIII.13) and Serapion (feast 21 March), a legendary personage.

A great synod on the subject of Monophysitism was held at Sidon in 512. The city was unsuccessfully attacked by the Frankish king, Baldwin I, in 1108, and was captured by the Crusaders in 1111 after a long siege by land and water. From that time it was a dependency of the Latin Kingdom of Jerusalem. In 1187 Sidon surrendered to Saladin, who destroyed the ramparts, but it was retaken by the Franks in 1197, and held by them, notwithstanding temporary occupations by the Arabs and Mongols, until 1291, when Sultan El-Ashraft threw down the walls. In 1253 Saint Louis resided there for several months, and the Templars held possession the greater part of the time. During the Frankish occupancy it was called in Latin Sagitta, and in French Sagette, from its native name, Saida. The Latin bishopric, suffragan of Tyre, was administered by the Patriarch of Jerusalem, and not by that of Antioch, as formerly; it was already in existence in 1131, having probably been founded some years previously. Dating from 1291 it was only a titular bishopric. For the Latin bishops, see Du Cange, Les Famillesd'Outre-Mer", 805; Le Quien, "Orienschrist.", III, 1319-24; Eubel, "Hierarchiacatholicamediiaevi", I, 473;.II, 260, III, 318.

After the departure of the Franks, Sidon was a city of little importance, acting as a port for Damascus; under the Druse AmeerFakhr-ed-Dín (1595-1634) many Europeans, especially French, being attracted thereto, it became very prosperous. Its downfall began, however, when Djezzar Pasha expelled (1791) all Europeans from the pashalic, and settled at Saint Jean d'Acre; its ruin was completed by the commercial development of Beirut. In 1837 it suffered from an earthquake, and in 1840 from a bombardment by European fleets; in 1860 nearly 1800 Christians were massacred in its district. In the necropolis were found the painted sarcophagi, said to be of Alexander and the Weepers, now at the museum of Constantinople, and considered the most beautiful in the world.