The Castle of St. Louis 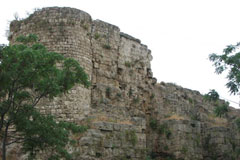 The St. Louis land-castle grounds were excavated in 1914–1920 by a French team. Then eastwards a new site was also excavated by another generation of French expeditions in the 1960s. This same site received renewed attention in 1998 when the Directorate General of Antiquities in Lebanon authorized the British Museum to begin excavations on this area of land that was specifically demarcated for archaeological research. This has resulted in published papers, with a special focus on studying ceramics.

French King Louis IX, popularly known as St. Louis, erected the Castle of St. Louis on the emplacement of a Fatimid fortress during the Crusade led.

Built in the mid-13th century, the present state of the castle makes it easy to observe various stages of the restoration carried out in the Mamluke era, particularly work done in the 17th century by Emir Fakhreddine II. At the foot of the hill are a dozen or so Roman columns scattered on the ground.