The archaeological Site and the Citadel

The ruins of many successive civilizations are found at Byblos, one of the oldest Phoenician cities. Inhabited since Neolithic times, it has been closely linked to the legends and history of the Mediterranean region for thousands of years. Byblos is also directly associated with the history and diffusion of the Phoenician alphabet. 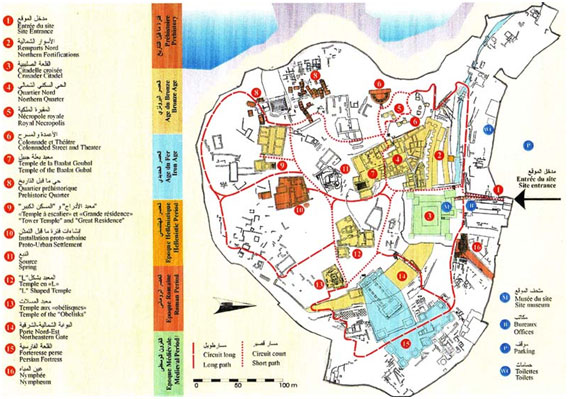 Byblos bears exceptional testimony to the beginnings of Phoenician civilization. From the Bronze Age, it provides one of the primary examples of urban organization in the Mediterranean world. 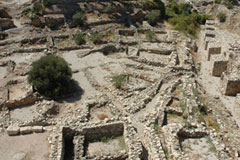 The Phoenicians, who considered Gublu (the Gebal of the Bible) to be one of their oldest cities, were in no way wrong: the site of Byblos has been continuously inhabited since the Neolithic period. The oldest human settlement, some 7,000 years old, appears to have been a fishing village whose numerous monocellular huts have been rediscovered.

Towards 3200 BC, a new spatial organization took form: the mound was covered with houses with stone walls, while the inhumation urns, until that time placed within the living area, were shifted to the periphery of the agglomeration where various types of funerary rituals may be observed in the large necropolis. Towards 2800, Gebal appeared as a highly structured city: enclosed by a massive fortified wall (whose construction, legend attributes to the god El), it comprised a main street and a network of smaller streets. 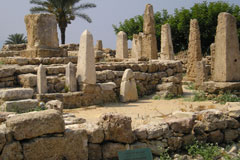 The prosperity of the harbour - from which cedar wood, an indispensable material for building construction and for naval yards, as well as cedar oil, used for the mummification of bodies, were exported to Egypt - entailed large constructions, such as that of the temple of Baalat-Gebal, the goddess of the city, which several pharaohs enriched with their offerings. This city, of which numerous traces still exist, was burned around 2150 by the invading Amorites: a thick layer of ash (in some places 50 cm) seals off the original levels.

Approximately two centuries later, the city was rebuilt with new temples (the Temple of the Obelisks, dedicated c. 1900-1600 BC to the god Reshef, is the best known of this period) and commercial relations with Egypt were re-established in all their intensity. Towards the middle of the Bronze Age, the treasure of the nine Royal Tombs of Byblos attests to the degree of perfection of a civilization which competed with that of King Ahiram (National Museum, Beirut), an inscription in Phoenician characters is addressed to eventual grave robbers; and one may see in this curse the proof that writing, widely disseminated, was no longer the monopoly of the scribes. 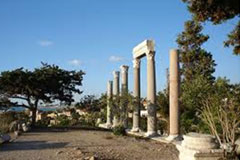 A commercial city, Byblos was able to accommodate successive dominations, whether Assyrian, Babylonian, Achaemenid or Greek.
During the Roman period, its commercial role declined, but the city assumed an eminent religious function: hordes of pilgrims, as noted in the 2nd century AD by Lucian of Samosate, crowded its temples, which were constantly reconstructed and embellished.

Its decline began during the Byzantine period and continued during the Arab occupation after AD 636. The only time when the city recaptured some of its former importance was during the Crusades. Under the impulse of the Genoans, commerce made Giblet a prosperous transit harbour. The renewal, which is attested by its walls, the massive structure of the castle of the Crusaders, the church of St John the Baptist and its baptistry, was without a future: Byblos declined slowly until the 19th century.
(source: www.unesco.com) 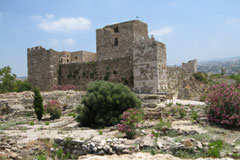 Byblos Castle is a castle in Byblos, Lebanon. It was built by the Crusaders in the 12th century from indigenous limestone and the remains of Roman structures. The finished structure was surrounded by a moat. It belonged to the genoeseEmbriaco family, whose members were the Lords of Gibelet (as Byblos was called during Middle Ages). Saladin captured the town and castle in 1188 and dismantled the walls in 1190. Later, the Crusaders recaptured Byblos and rebuilt the fortifications of the castle in 1197. In 1369, the castle had to fend off an attack from Cypriot vessels from Famagusta

The Byblos Castle has distinguished historical buildings for neighbors. Near it stand a few Egyptian temples, Phoenician Royal Necropolis and the Roman amphitheatre. These are testament to the varied and rich history of the town of Byblos.